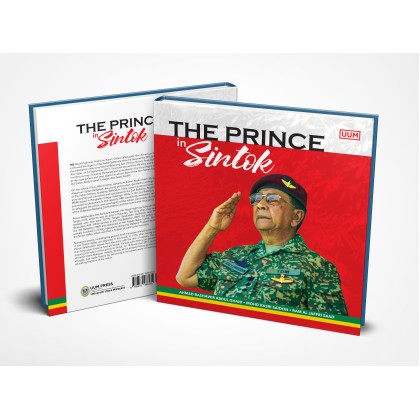 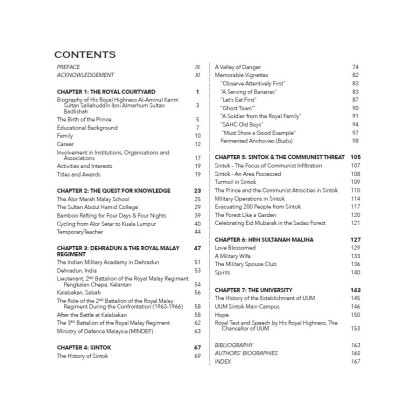 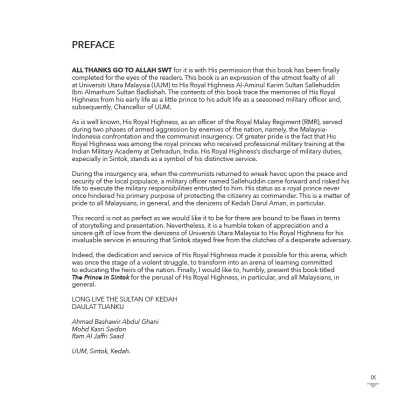 The Prince in Sintok

His Royal Highness Al-Aminul Karim Sultan Sallehuddin Ibni Almarhum Sultan Badlishah continued the legacy of the Kedah Sultanate when he became the 29th Sultan of Kedah at the installation ceremony held at Balairung Seri (Throne Room), Anak Bukit Royal Palace, Alor Setar, on 12 September 2017. This book recounts his life story and the chronology of his life’s journey, including the twists and turns therein. His story begins with his early life at the royal palace and then spans his school days at the Alor Merah Malay School and the Sultan Abdul Hamid College, Alor Setar, Kedah.

On the advice of his elder brother, Almarhum Sultan Abdul Halim Mu’adzam Shah Ibni Almarhum Sultan Badlishah, the young prince, then, decided to undergo military training at the Indian Military Academy, Dehradun, India. Upon his return home, HRH joined the army as a Second Lieutenant and was placed in the 2nd Battalion, Royal Malay Regiment (RMR) based in Pengkalan Chepa, Kelantan. While in the 2nd Battalion, RMR, HRH was promoted to Lieutenant. In this capacity, HRH was directly involved in security operations to safeguard the peace and sovereignty of the nation, particularly during the tense eras of the Indonesia-Malaysia Confrontation and the Communist Insurgency.

Prince Sallehuddin met his future consort, Her Royal Highness Sultanah Maliha Almarhum Tengku Ariff, while he was on duty in Kelantan. Not long after, they married and were blessed with two sons, DYTM Tengku Sarafuddin Badlishah and YTM Dato’Tunku Shazuddin Ariff. While serving in the 2nd Battalion, RMR, the prince was assigned to the 3rd Battalion, RMR and stationed at the Kepala Batas Camp, Alor Setar. He was actively involved in military operations along the Malaysia-Thailand border, especially in the Sintok Valley, which was then a hotbed of communist terrorism.

Numerous events, including the prince’s fond memories related to his military operations in the Sintok Valley, are depicted in this book. In 1974, after having served ten years, Prince Sallehuddin retired from the army with the rank of captain. Though it was more than forty years since he had left Sintok, his tryst with destiny, as decreed by Allah SWT, required the return of the prince to Sintok, on 18 November 2017, as the Chancellor of Universiti Utara Malaysia. Indeed, Sintok, which entered history as the arena of a violent struggle, has made history by becoming a renowned arena of learning committed to educating the heirs of the nation.